My favorite way to eat leftovers is for breakfast the next morning. It doesn’t matter what is it – pizza, chinese food, or a boxed up salad from the night before. And I like to eat it cold. I know, it’s weird.

This morning I decided to be more normal and make scrambled eggs. I opened up the fridge and saw the wilted spinach I had made the night before. I scrambled up some eggs, added the wilted spinach, and found some pico de gallo and smoked salmon, which I tossed in too. I sprinkled on a little parmesan, and THAT is how you do leftovers people.

Tonight we were suppose to go out with some friends, but the baby decided to have a fussy afternoon, so our plans quickly changed. Which normally isn’t a big deal, except for the fact that I actually showered and dried my hair. Which seems basic, but when you are mom, it’s not so basic.

Quick was what I was aiming for tonight. Mark wanted cookies for dinner but we needed something a little more substantial. (Even though he could probably survive off cookies and be completely fine). I ended up making Collard Greens Sautéed with Chicken and White Beans. I got the recipe from my Cooking Light magazine in the March 2016 edition http://www.myrecipes.com/recipe/collard-greens-saute-chicken-white-beans.

The recipe called for a rotisserie chicken, which I had bought earlier, but I snacked on the whole thing. I’m not even sorry. So, I had to cook up some chicken breasts. Besides adding that extra step, the whole recipe took less than 15 minutes. 12 minutes actually. 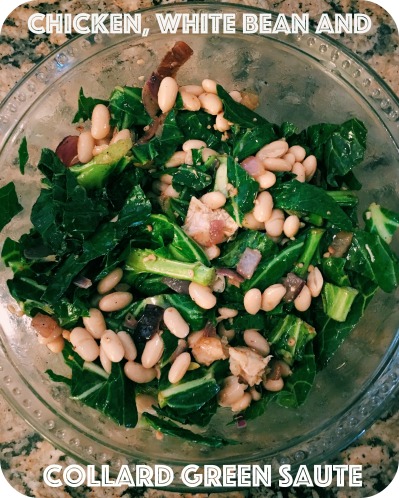 It had veggies, chicken and even a little bacon to satisfy any man’s palate. A winner in my book.