Since Mark is gone (and I barely even have time to eat Coop’s leftover mashed bananas) I’m no longer cooking as much. Because what’s the point? So, that means I have now taken on the role of being the husband and wife in this relationship. Which means, instead of dedicating all my time to babies and cooking, I am now dedicating my time to yard work, car work and fixing stuff.  Well, and of course the baby.

The entire time we have lived in this house, the backyard has been a MESS. A few weeks ago I said forget this… we are buying patio furniture. I don’t care if I have to sell all my belongings (which I would get about 15 dollars for) I was decided to pull the trigger. It wasn’t until I hit the “confirm purchase” button, that I realized Mark would be gone when it was all delivered. Crap.

This is the “before” picture. I looked nice and non-sweaty here. Oh, and don’t worry, there were 3 more piles this size on either side of me which aren’t pictured. It would have been too scary.

For a hot minute I researched handy men to assemble all this crap because basically…I didn’t want to. Then I figured out they cost almost as much as the furniture – so that was the worst idea ever.

Luckily my mother in law was in town so she could watch the baby while I assembled all this stuff. Otherwise, I would be lounging on collapsed patio furniture the rest of my life. 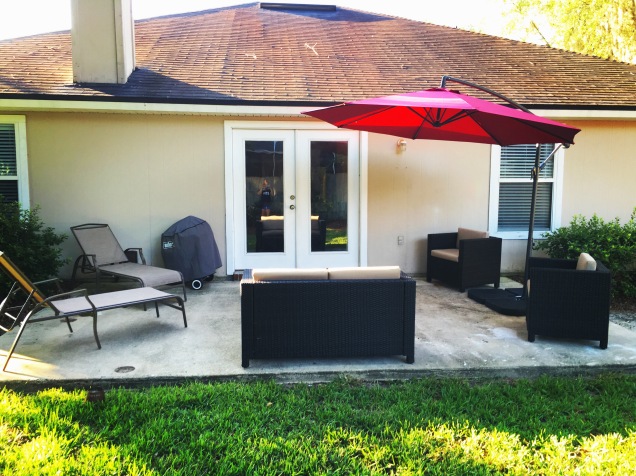 Bottom line…I did it. All by myself. And what I discovered is that I make a great husband.  Which sounds powerful but also incredibly daunting and exhausting and really just creepy.

One thought on “Cooped in the Backyard”