We just got back from California where we were visiting my family. It was wonderful, but traveling with kids is exhausting. I don’t care what you say. The airplanes, the time changes, the exploring and visiting, the new surroundings, it gets to them man. Or at least my kids. Maybe my kids are weird.

The night before we flew back home to Florida we stayed in a hotel near the airport. The airport is 2 hours from my parents house, and our flight was at 7:30am, so it seemed to make the most sense. But this was probably a bad decision. Nope, it was a bad decision. My sister was staying with us, too, so we shared the bed in the bedroom, and Camryn was in the pack n play next to the bed. Mark and Cooper slept in the pull out couch in the living area of our hotel room.

We put Camryn down at 7pm and we all went to bed at 8pm. Camryn then proceeded to wake up every 45 minutes. 45 MINUTES. This never happens – she’s a solid 12 hour a night chick at home.

I finally figured out (by 1am) that she was content if her whole body was just laying on top of mine in the bed. Which allowed for a silent baby…but a crushed mother. Also, it was at this time, 1:15am to be exact, that Cooper woke up from a night terror – screaming. I listened to him cry for 10 minutes while Mark was trying to console him but it wasn’t working. I had to make a decision and put Camryn back in the pack n play (knowing this was gonna backfire) and went to lay with the boys. It took 15 mixtures to get him back to bed. Between 1am and 4am Cooper got up a total of 3 times and Camryn still every 45 minutes…

Onto the actual travel day – our first flight was 5 hours and honestly not bad. We knew this was the long flight and the second flight was only going to be 2 hours, and after those 2 hours we’d be home. Wrong. We boarded the second flight. Everyone was seated. The door was shut, and the Captain said we had to wait on the tarmac because of road work and weather. This took 3 HOURS! I kid you not. We boarded at 5pm so it was during dinner time and the whole plane was furious. Luckily I had snacks, (which our neighbors kept snagging – lame), but still, it was quite the ordeal. About 2 hours in, the Captian got on the speaker and said “we just got the green light to push off, but someone is in the bathroom so I had to cancel the push off”. What?! The seat belt sign was on the entire time we were just sitting on the tarmac which was also retarded. Like did they expect no one to pee for 3 hours? Heck even I walked around half the time with Camryn cause she is half child half wiggley worm

We finally walked into our house at 10:30pm. We put Camryn down at 10:45pm, Cooper at 11pm, and Mark and I went to sleep at 11:15pm. At 11:30pm I heard Camryn crying. I went and picked her up, started walking to the kitchen and noticed she was soaking wet and smelly – puke. Puke everywhere. I yelled for Mark to come help. He walks in to meet me, turns on the light, Camryn looks up and projectile vomits all over us, the floor and the couch. Welcome home!

No, poor thing really. She slept with us after we cleaned her and everything up. And sure enough Cooper joined us at 3am.

But alas, it’s the next day and life must go on, so I made this dinner. And this dinner made up for that entire story. 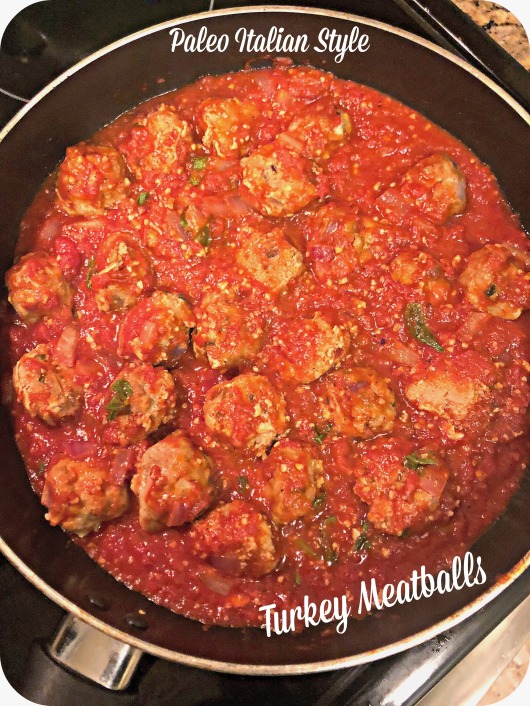 I’ve made Paleo Mashed Potatoes before and Cauliflower Rice, but never Mashed Cauliflower. Man, we were missing out. Mark thought there was butter in here (there was not), because it was so creamy. It was from the cocout milk. I always forget this gem of an ingredient and then when I remember it I just want to chug out of the can.

The turkey meatballs were super easy to mix together and then bake up real quick. The sauce simmering on the stove only consisted of a few ingredients, and smelt so delicious, which means I never wanna use that premed jarred marinara crap again. 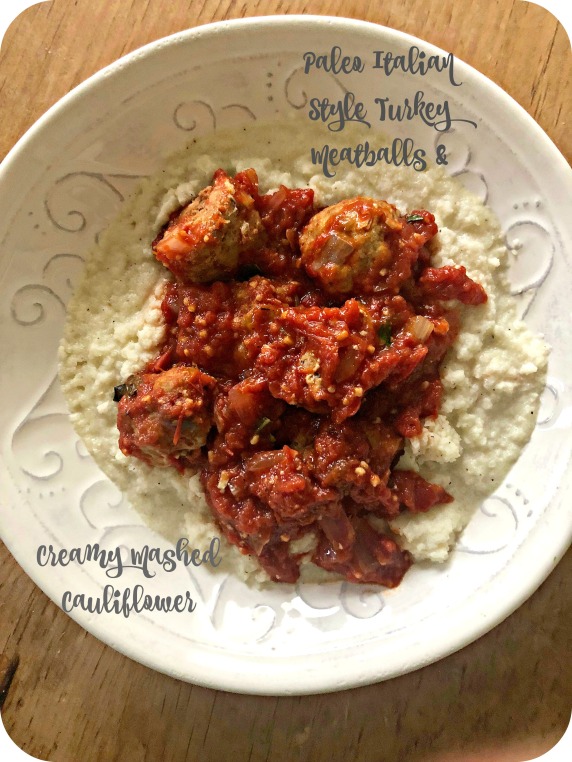 This recipe came from my new cookbook Coconuts and Kettlebells by Noelle Tarr and Stefani Ruper. I could go on and on about these women but I’ve already talked wayyy too much on this post. Next post I’ll gush about them. Promise.