Before I met my husband I ate healthy. Like really healthy. I mean like I lived off salads, fruits, fish and lean proteins (think chicken breast, nonfat greek yogurt and egg whites). Then, I met this guy. I remember one of the first meals he made me; hot dogs and a side of baked beans. I even took a picture of it; because I realized my version of eating was never going to be the same.

If it were up to me I’d still be eating like a bird. But that’s not realistic anymore, which is why I create meals with ingredients like pasta, hearty steaks and creamy mashed potatoes. I love preparing these meals. But I do still try (and enjoy) eating clean.

Tonight, I went back to my roots. I made salmon, laid into a rich tomato broth, topped with a cashew/green onion relish…if you will. On the side I made a warm wilted spinach salad with homemade toasted sesame seeds.

I placed the ingredients for the tomato sauce in the blender. I took that puree and heated it on the stove for 10 minutes. While it was cooking, I took the salmon filets, sprinkled them with salt and pepper (two ingredients which should never be left out of a dish, in my opinion) and cooked the filets for 4 minutes per side. I poured the broth in individual bowls, topped them each with a piece of salmon, and then dabbed a spoonful of the cashew/green onion mix on top.

For the spinach, I heated up sesame oil in a wok and added in a ton of spinach. I’m talking a ton. I threw on some black pepper and toasted sesame seeds – and just like that the most simple side was complete. 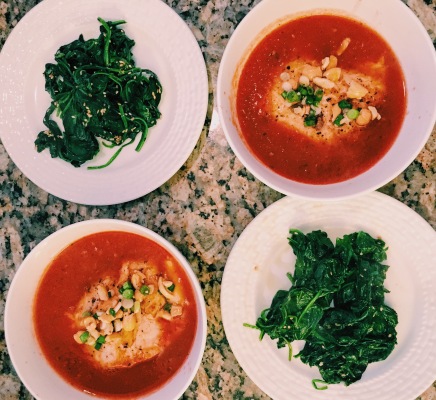 One thought on “Salmon and Wilted Spinach (My favorite kinda meal)”