Two exciting things happened today…Mark’s best friend came into town, and we gave Mark Cooper real food for the second time in his short little life. The first thing was positive, the second…not so much. Oh and I also made a pretty good dinner. But when you feed your baby solid food for the second time, rice cereal ends up trumping all other human food.

Let’s start with dinner. I made a mushroom and chicken marsala bowl. Super good. I got this recipe off my Cooking Light magazine in the Jan/Feb 2016 edition. Here is the link to the exact recipe http://www.myrecipes.com/recipe/mushroom-chicken-marsala-bowls.  I love chicken marsala but all that pasta leaves me bloated most of the time. This recipe subbed in quinoa (which I loooove) for the pasta. I added extra mushrooms and spinach too which made it more filling in a healthy way, which I am all for. The recipe called for chicken thighs but we prefer chicken breasts so I swapped that too.

I toasted and cooked the quinoa first, and put it to the side to rest. Then I wilted the spinach in a skillet, put that to the side, and then browned the mushrooms in some butter and oil. Next came the chicken which I cut into large nugget sizes and browned them up in some oil. I threw on the shallots, thyme and garlic on top of the chicken about 6 minutes in, and cooked that for about 2 minutes. I added the wine and stock next and let that simmer for a few minutes. Lastly, I added the remaining butter, dijon, more salt and pepper and let that cook up for about 1 minute. I layered the quinoa on the bottom of each of our bowls, topped it with the spinach and mushroom mixture, and topped that with the chicken and sauce. I thought it tasted devine on its own, but Mark added some Sriracha on  his which gave it a nice kick. 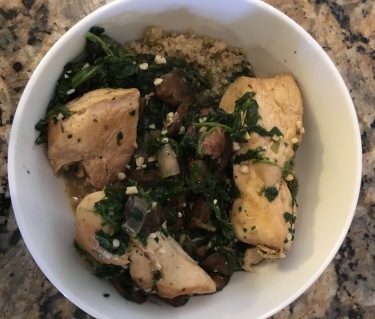 Before this dinner commenced though,  we tried to give Mark Cooper rice cereal again. Tried being the key word. We plopped him down in his high chair and thought it would be an even better experience than when we first gave it to him. One would think these babies would just get better and better at the whole eating real food thing. Wrong. The first bite was okay but the second bite was misery! He immedialty started wailing. There is no way to describe his facial descriptions so just look…. 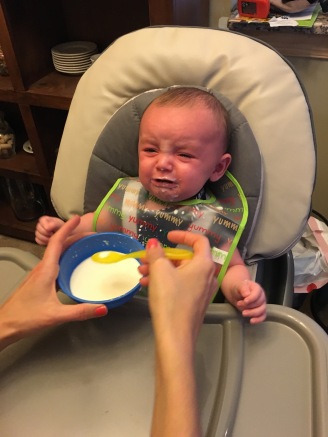 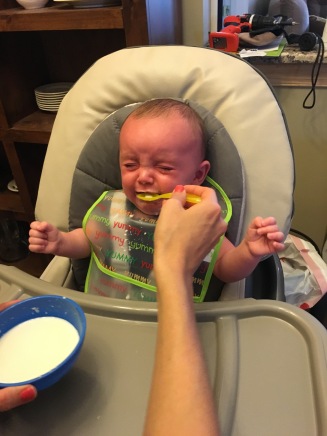 It’s so sad but at the same time you can’t help but giggle (we can’t help it) because even when he’s sad he’s still so stinkin’ adorable!

After dinner, Mark ended up going out with some buddies (the best friend from out of town) and I stayed home with the babe. Obviously we both can’t go out at the same time anymore and let the little boy fend for himself. But honestly, it’s more than fine with me because sitting on the couch, drinking wine, and watching chick flicks in my sweat pants is way more enjoyable. Why is that so underrated? 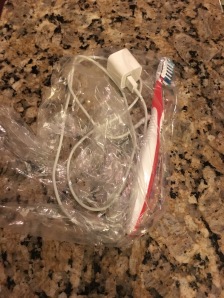 P.S. – This is all Marks buddy brought to stay over at our house for the night. A toothbrush and phone charger. How much more simple can it get? I would have packed a least 2 bags, one for clothes and one for shoes. I wanna be a guy.