I was running around shopping all day, so once I got home I had no energy to cook an extravagant dinner. I was just about to pull the trigger and order take out when I was like, wait…I can totally just make a pizza myself. I had to run to the store though. So maybe it wasn’t that easy as I originally thought…

I made 2 different pizzas. The first one was a man pizza : Supreme (sausage, pepperoni, bell pepper, mushrooms, olives, and onions). The second one was a girl pizza: Chicken Mozzarella  (fresh mozzarella, chicken, mushrooms, onions, tomatoes and olives). 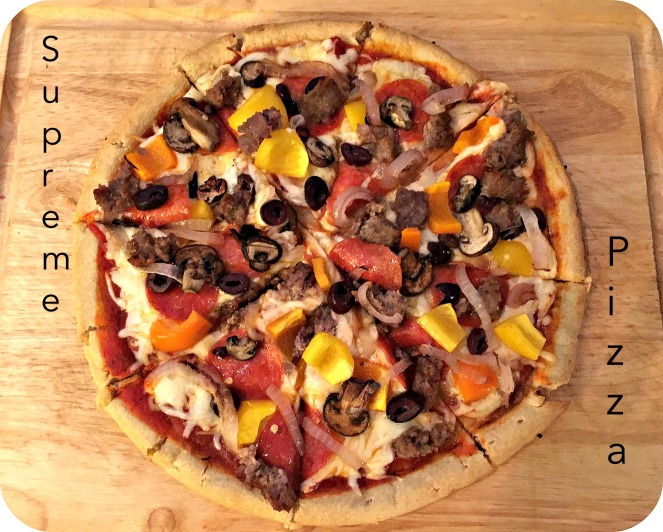 Instead of using traditional pizza sauce, I swapped it for this jar of tomato bruschetta. That was the kicker. It had tomatoes, basil, garlic, and spices. Actually, I have no idea what’s really in it. The jar is ALL the way in the fridge and I’m too lazy to go look. But it’s bomb.

Did I make my own pizza crust? Hell no. I wanted to order take out remember? No way was I going to make the dough. I went with the pre-made crust/jar of sauce/pre-shreeded cheese route. I did brown my own sausage on the skillet though. Which means I can really slap the “homemade” part on top of this pizza recipe.

The guys ended up liking the chicken pizza more. Probably because I layered on extra slabs of fresh mozzarella at the end. Which I didn’t admit to at first. But let’s get real – cheese is the best part of pizza. Cheesy pizza wins. Every. Time. Sorry vegans.